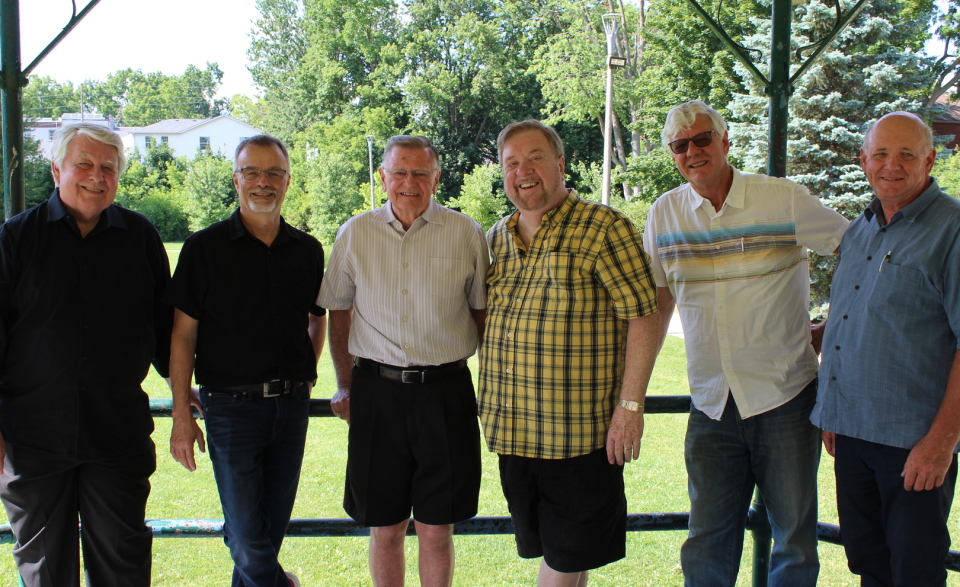 Watchmen - One by One - Alphabetically 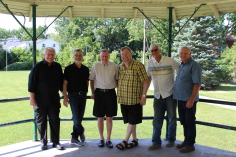 The Watchmen have seen some members come and go for a variety of reasons but all remain strong friends to this day. Some are now in Heaven while others have moved or followed changes in career etc. The current lineup of guys are all seasoned members including:

All are in active service in their local churches and keep busy with their careers and family lives. Catch up with them individually in the section below.

Mark was born and raised in Brantford, Ontario.  He and his wife Gwen just celebrated their 40th Wedding Anniversary in 2022.  He has two adult daughters Michelle and Tracey.  Mark works as a Production Technician at

SC JOHNSON, and is looking forward to retirement in a couple years ?

Mark is no stranger to Gospel Music in Southern Ontario. He has been singing since he was 14 years old, when he joined the Bill Prankard Evangelistic team and travelled with them for 3½ years.  His next 3½ year ministry opportunity was at Teen Challenge with George Glover, travelling as their special music, while teens shared their transforming testimonies. Mark has ministered in various groups including the Watchmen Quartet during most of the '80s. Many will remember him singing with One Accord or, more recently, Heading Home Trio (now disbanded).  Many years he led worship in his home church and was involved in the community Musical Productions at The Sanderson Centre for Performing Arts in Brantford.

Tim Harden was a wonderful encourager and always challenged and encouraged Mark to never give up singing for the Lord.  So it only seemed fitting when Tim became ill, that Mark would step in and rejoin the Watchmen.  Big shoes to fill, Tim was more than confident Mark could do it and so he accepted the offer to carry on and honour Tim.

Mark looks forward to meeting or reconnecting with you.  Keep in mind, it has been 40 years since Mark sang with the Watchmen Quartet. So if you met him then, please come and meet him again because we all know that the memory gets foggy on this journey called life.

Dave was born and raised in the Kitchener area. He has held many different jobs over the years which has helped give him insight into the lives of those in his congregation. He pastored for many years at Vineland Missionary Church but has now been pastor of Glenridge Bible Church for over 30 years. His congregation loves him. Dave and his wife Kaye have 4 children. Glenridge Church also host summer concerts at the Henley Rowing Stadium in Port Dalhousie that are completely packed out regularly. The Watchmen also appreciate Dave's gift of "Bible Stories with Surprise Endings" which always delight the kids - young and old alike.

Doug was born in 1951 and is very thankful for Godly parents & grandparents and a wonderful childhood, with the exception of losing his oldest brother, Lawrence, in a tragic auto accident in England in 1970. He still has one older brother, Stu & his lovely wife Gwen.

Doug joined the Watchmen about one year after the group had begun. Doug had heard the quartet sing at Elim Lodge in the summer of 1969 and expressed his interest in joining the group. It happened in the fall of that same year.

Doug married the love of his life, Lois, in October of 1976 and together they raised five wonderful children: Karen, Barbara, Marilyn, Greg and Brad. His three daughters and one son are now all married.

· Barb and Matt have 3 young sons, Liam, Travis and Tyler and a daughter, Breanna.

· Bradley, their youngest son, married Brittany Lawson in February 2015. They purchased their first home on Scugog Island in Port Perry. The great news is the birth of their first son, Cameron, on Dec. 7th 2021 and this makes 10 grandchildren for Doug. Both Brad & Brittany work for Lawson Home Improvements in Uxbridge which Brittany's parents own.

Doug has now fully retired from the furniture business where latterly he worked at Homestead Furniture & Appliances right in beautiful Port Perry...about 5 minutes from home!!

In mid-October of 2011, Lois was diagnosed with advanced Stage 4 cancer. After undergoing chemotherapy and surgery in early 2012 she enjoyed relatively good health until it returned in January 2015. Chemo treatments were completed in mid-May that year but it returned again in Feb 2016. Her third round of chemotherapy finished in Sept/16. Sadly, the cancer returned in January of 2017 and though chemo treatments were started, they had no effect and Lois passed away on May 25th 2017. The family is grateful for all the prayers for them during these past several years. Their faith remains rock solid on Christ who, through this trial, has given them a sweet peace that passes all understanding. (Phil 4:7) Doug resides in Port Perry, just north of Oshawa.

Roy was born February 4, 1947 to Godly parents in Belfast, Northern Ireland. He accepted Christ as his personal Savior at the age of 6. Roy’s dad was a member of the Crystal River Quartet that travelled throughout the British Isles so was exposed to Gospel Music at an early age and eventually fell in love with quartet music. In March 1954 the quartet, along with evangelist Bob Dowie, came to Canada and were known as the Crystal River Evangelistic Team singing and preaching throughout the Maritimes. In 1957 the Lewis’ family moved from Moncton, New Brunswick to Guelph, Ontario. He began singing with the Canada’s Galileans from 1965 to 1969. Roy married his wife Ruth on May 20, 1967.   The Lord blessed them with two sons, a daughter, two daughter in-laws, one son in-law, three grandsons and three granddaughters. He entered the insurance business in 1969 and incorporated in 1980, forming Roy Lewis Insurance Brokers Ltd. Roy heard the Watchmen at the Guelph Bible Chapel the year they began singing. He appreciated not only their singing, but their ministry. It was an exciting time for Roy, when asked in February 2013, to join The Watchmen Quartet as the bass vocalist and counts it a real privilege to be part of this ministry today.

Having appreciated the musical ministry of the Watchmen for many years, Don was excited to become a part of the group in 2013 and share the love of Christ through music. Besides playing the piano, he enjoys arranging songs for the quartet and occasionally a vocal part.

Growing up in a pastors home, Don experienced the joy of ministry from a young age, singing with his family in both the US and Canada. Pursuing a career in education, he has been a teacher and a school administrator. At the same time his background in music led him to serve in various churches, including The Peoples Church, Toronto, as pastor of music and worship arts. After serving in denominational leadership, both domestically and internationally, Don is currently the                                                          Regional Director, Central Canada for the Evangelical Fellowship of Canada.

Don and his wife, Suzanne, live in Baden (near Kitchener). The families of their two adult children (five grandchildren) bring a special delight to their lives.

David was born April 13, 1959, the first born son of Nelson & Katie Roth. He grew up on a farm just outside of Wellesley, ON. David has always loved to sing and in his teens, along with three friends, formed ‘The King’s Messengers’, an a cappella male quartet. They sang together for nearly 20 years and made three recordings. David committed his life to Christ as a teenager and was baptized when he was 18. He met Mary Elizabeth in 1979 and they were married 4 years later in July 1983. They have three adult children (and one grandchild!) – Victoria, married Alex (Bauman) in September, 2012 and have a new baby, Huxley; Dallas, married Kendra in August 2014; and Vanessa, married Jeremiah (Johnson) in May, 2014 & now reside in Minnesota, USA. David has been part of the ministry team at Faith Mennonite Church in Kingwood since 1993. He works for Home Hardware in Wellesley, ON.﻿

Nick joined the Watchmen after playing for a few other well-known Canadian quartets including The Torchmen and Middle Cross. As Tim often used to comment "We're not sure if he is working his way UP or his way DOWN by now playing for us". In all seriousness though, Nick has been a welcomed member to our group. His ability on the bass guitar is amazing. Audiences especially enjoy it when Nick & Don play some duets together while the crowd is finding their seats before the concert begins. And their offeratories are always delightful. But more than anything else, the quartet loves to have Nick share his amazing testimony of God's leading in his life. If he doesn't get an opportunity to share it from the platform, be sure to ask him to tell you about it after the concert. You'll be glad you did. He is also an avid Bible student, biker, golfer and scuba diver! 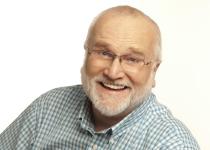 We announce with sorrow the recent passing of our dear brother Tim on June 7th, 2022 after a short battle with liver cancer. He will be greatly missed.

Born in Kitchener, November 8th, 1951 to Alf and Marg Harden, the youngest of four children, Tim grew up in a wonderful Christian home. Tim developed a love for music at a very early age and remembers standing on a chair to sing for the church at age four.  His father sang tenor for many years with “The Master’s Men Quartet.”  Tim attended high school with David Jantzi and Keith Elliot and they all attended Bethany Missionary Church, as did their older friend David Yake who was at the University of Waterloo.  They began to sing in 1968 as the result of a talent contest organized by Emmanuel Bible College in Kitchener.  Tim was the first quartet member to get married and he and his wife, Jackie have two sons, four grandsons and one grand daughter. Tim’s oldest son, Jeff has picked up the family tradition and loves to sing for God’s glory.   Regarding the Watchmen, Tim says, “The quartet has been a very important part of my life and I am so grateful for the faithfulness of the Lord to this group through the years and thousands of miles travelled.  Now more than 54 years later, God continues to amaze us with His grace at work in us and through us to bless others with the wonderful gift of music.

The best way to contact us is by calling

Dave Jantzi at his

Mail any correspondence to...

We look forward to hearing from you soon.

PLUS the number shown here !!